The woods and fields are greening up and we are once again in the throes of an exciting turkey season here in North Carolina. This year, the season began back on April 14th and will continue all the way up through May 12th, 2018. So, if you haven’t yet been able to hunt, you still have plenty of time to grab a tag, get your gear together, and go out to enjoy nature and hopefully harvest a nice bird.

The Current State of the State’s Turkey Population 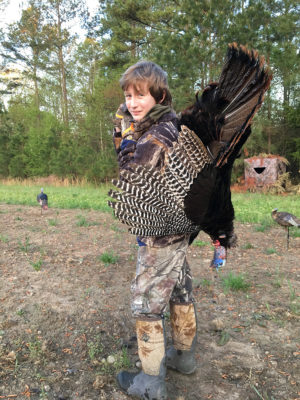 North Carolinian’s are blessed with a plentiful population of Eastern wild turkeys, but it hasn’t always been this way. In fact, just a short century ago, wild turkeys were becoming extremely scarce, due to decades of aggressive hunting, poor management, and the rapid deforestation that was taking place in the state.

In the 1950’s, as an effort to stem the decline and help rebuild flocks of Eastern wild turkeys throughout the state, the North Carolina Wildlife Resources Commission began trapping and relocating wild turkeys to a series of 358 release sites. In addition to working with the small population of native wild turkeys, many were also brought in from other states, many of which were also working to rebuild their own flocks and establish better management practices.

The numbers show that the restocking program, along with improved management practices, has been a resounding success. As late as 1970, the wild turkey population was estimated to be just 2000 birds. Just 39 years later, in 2009, the population had grown to more than 150,000 and the numbers of healthy birds continued to grow and expand. By today’s estimates, there are now more than a quarter million wild turkeys in North Carolina today, with populations found in all 100 counties.

For those who have had a successful hunt this year and are now looking for a recipe to use when preparing it, here is a quick and easy one we think you will enjoy. But we have to warn you that this method of cooking is not exactly diet fare, so you may want to need to get out and burn off some of those calories after dinner.

Salt and pepper, to taste

Salt and pepper each side of the turkey breast pieces to taste and set aside.

In a shallow bowl or pie plate, mix together the flour, salt, pepper, garlic, onion powder, and parsley, then set aside.

In a second shallow bowl, mix together the milk and beaten egg, stirring briskly with a fork to mix well.

Dredge turkey breast pieces first in the flour then dip them into the egg, before giving them one more roll in the seasoned flour. Shake off any excess coating and set aside.

Place a large cast iron skillet on medium heat and place one stick of the butter in the pan. Melt the butter completely, being careful not to overheat or burn it. Then carefully place a single layer of coated turkey breast pieces into the skillet, being sure to leave some space in between each one. Fry each side about five minutes, until the coating is crispy and golden brown, then remove and drain on paper towels.

Since the coating is going to soak up some of the butter, add some of the remaining butter to the pan between batches, as needed to continue frying.

Once the turkey has all been fried, you can also make a simple country gravy to serve with it. To do this, add a couple tablespoons of butter to the skillet in which you just fried the turkey. Over medium heat, melt the butter, then whisk in two tablespoons of flour and season with salt and pepper to taste. Continue to stir for a minute or two to allow the flour and butter mixture to develop a rich golden color and then stir in 1 cup of whole milk and 1 cup of half-and-half. Continue stirring until the consistency is thickened and serve immediately with the fried turkey.

Hungry to Experience Even More of North Carolina?

Here at Legacy Farms and Ranches of North Carolina, we love turkey season too, and we hope that your 2018 spring turkey season is one filled with good friends, good fun, and good food. And if you or someone you know is interested in buying or selling rural real estate, we would be honored to assist you. Gardner can be reached at 919-749-3177 and Frank is available by calling 919-696-4249, or if you prefer, you can visit our site and view more our current listings at www.legacyfarmsandranchesnc.com.

In the meantime, Happy Turkey Season from all of us here at Legacy Farms and Ranches of North Carolina!