Scary streets and haunted houses exist in every town and every state of the nation, and North Carolina is no exception. Now is the perfect time of year to explore some of these most strange and spooky buildings, bridges and burial sites ….

Few are aware that Blackbird the Pirate – Edward Teach, to his mother – made his home on Ocracoke Island, including the years he so infamously pillaged and plundered his way up and down the Atlantic Coast, between 1716 and 1718. In early November of 2018, members of Blackbeard’s crew, holed up in an inlet on the island, were shot or stabbed to death by members of the Royal Navy, and Blackbeard himself suffered the bloodiest ending of all, being shot, then stabbed, and finally beheaded. As his head swung form the bow of his captors’ ship, legend tells us Blackbeard’s headless body swam around the ship three times before finally sinking. Today his ghostly spirit is said to groan and whisper, “Where’s my head?” to unsuspecting visitors.

Another location that has had no end to spooky sightings is the historic USS North Carolina, moored across the river from downtown, Wilmington, NC. Visitors sometimes report visions of various figures roaming the hallways and decks of the retired battleship, including the ghost of a soldier who died in the ship’s washroom during a torpedo strike. North Carolina’s most haunted ship lures paranormal investigators from around the world.

The name itself of this eerie, unsettling area is enough to keep most visitors far from the wetlands’ forbidding waters, but those who do dare to explore sometimes report odd lights, unexplained mists and strange noises among the ancient cypress forests and waterways. 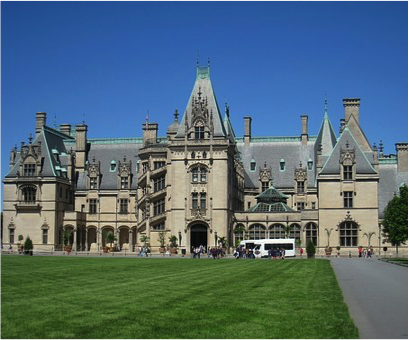 quite haunted? The voices of George and Edith Vanderbilt, former owners of the estate who died on the property, are sometimes heard in the swimming pool room or library, and at night, it’s been reported, the ghost of a headless orange cat strolls amongst the gardens and bass pond. Edith is most commonly heard whispering the name of her husband as she did at his deathbed in 1914.

Probably the most haunted hotel in North Carolina is the famed Grove Park Inn, also in Asheville. Haunted by a strange “pink lady” – a former hotel guest of room 545 – the hotel was the site of the young woman’s death as she either jumped or was pushed to her death from her balcony, five floors above the Inn’s Palm Court, in the 1920s. Most visitors report feeling watched or the sensation of being touched, while others claim to see a pink mist flowing along the hallways of the property.

The infamous ghost of Lydia, a young woman who died in a car crash alongside her date at the site, is said to have flagged cars down for help or even been given lifts by good Samaritans all the way to her mother’s home many years after she died at the bridge. Visitors still seek sightings of Lydia at the bridge, which is no longer in use.

The school’s surprising amount of paranormal activity is spread out between different areas of the campus. Room 303 of Hall Brown, or Overcash Hall, was the site of an incident in which a student, waking up to see her roommate slumped over a desk, tried to wake her and realized, suddenly, the figure was not her roommate but a ghostly figure that immediately vanished. Elsewhere, students often report seeing the apparition of a well-dressed lady strolling by in the Suzanne Little Rehearsal Hall.

The “Weeping Arch” of this historic cemetery, built in 1854 of a local stone consisting of the fossilized remains of sea shells and sea animals, sometimes “bleeds” – or weeps – a red-tinged liquid. Legend says that if a pallbearer is hit with a drop of this red, “bloody” water during a funeral, he will be the next to die.

Legend has it that anything placed within a certain circular area in Chatham County will be thrown outside the circle by the next day so that “the devil has room to dance.” Eerie footsteps are sometimes heard in the area, and – reportedly – ghostly, glowing red eyes are sometimes spotted, keeping watch over this barren piece of ground where nothing grows.

The Bodie (pronounced, chillingly, “body” after the dead bodies that washed ashore here in decades past) Island Lighthouse has guided ships at sea since it was constructed in 1871, but it was not the original structure on the property. A former house on the property was destroyed by Confederate soldiers to prevent Union soldier from using the home’s tower as a lookout. Today, it is the gateskeeper’s cottage that is the site of the most paranormal activity – most notably, a strange knocking sound, always around 4:00 pm, coming from behind the large, bricked-over fireplace….