If you live in a pretty urban-sprawl area like I do, it’s not often that we get the chance to cruise through little towns.  You know the ones:  maybe two stoplights, possibly a blinking one, all the buildings seem to look at you from both sides as you’re driving through.  Old faded paint Coke signs on sides of buildings, or homes with actual front porches and neighbors talking.  General stores, where the gas is still full-service only.  Sleepy little towns. Towns that country songs make famous just because of their anonymity.

Rolesville didn’t strike me as a sleepy little town about to get written into the next Miranda Lambert song.  Oh, don’t get me wrong, it’s a little town, but it’s not sleepy.  It’s growing.  Bursting at the seams, actually.

I was driving north on Highway 401 from Raleigh to my farm outside of Bunn and decided to really take a look around.  I generally do, whether it’s to analyze the potential business locations or to check out my gut-feel about real estate investing.  I thought I had turned that dirt when it came to Rolesville because this is familiar territory.  I mean, I’ve blown through here a million times.  (Slowly.  Of course.)  I’ve shopped at that Food Lion.  I’ve taken my dog to that big vet on the left (what the heck?  It’s called a doggie spa too now?).   I remember when they built that Sonic drive-in.   Lately, though, I realized there’s just a lot more activity to notice about the town that’s happening right under my nose.  So I decided to investigate, and turned left onto Rogers Road.  (See here why I was rolling through Rolesville on my way to put signs out on properties in Franklin County.)

Seems there are currently 165 or so open listings of homes for sale.  Apparently there’s a LOT more than meets the eye – I clearly see that 401 is not the only main drag in town.

Incorporated in 1837, Rolesville is the second oldest town in Wake County (Raleigh was incorporated in 1792).  Back then, farming was THE main event, and there are still many family-owned farm tracts of land around Rolesville.   One interesting thing to note about a town being incorporated in the 1800’s:  there’s no water in Rolesville.  It’s not built on a river, nor is it near any natural lakes.  There are a couple creeks running through it, like Sanford Creek loaning its name to the town’s greenway, and the omnipresent Crooked Creek that seems to turn up on every map, but really it was built as a mill town or a rail town. 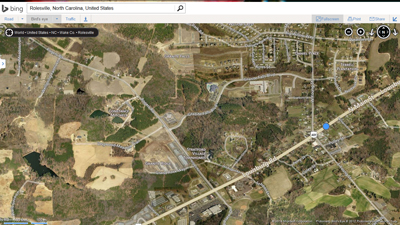 A birds-eye view of rolling through Rolesville NC clearly shows it is a town in transition, from working farms to sprawling subdivisions side-by-side.

What is noteworthy would make you geology geeks out there swoon:  this town’s home to the Rolesville diorite batholith, often called in them-thar geologist circles the Rolesville Pluton.  I’m a bit of a geek myself but even I had to look up what that’s all about – looks like there’s a huge huge expanse of granite rock, very visible in several places in and around town.  Aha!  That’s why there’s Granite Ridge, Grand Rock Way, Granite Falls, and Granite Crest subdivisions.  Something else I noticed was that there’s actually a subdivision called Old Town.  Now, anytime there’s something people are proud to call “old,” there’s probably a reason.  That reason is Rolesville sprawl – everything else is pretty much new! Because of the primo close-to-work-and-play location just tippie-toed right outside of Raleigh and Wake Forest, Rolesville has become one of the top three fastest growing communities in North Carolina every year since 2005.  The Heritage – a HUGE planned community that pretty much takes up the space between Wake Forest and Rolesville – has sections called “Heritage South” and “Heritage East” that touch the town now because of their growth.

You’d think with all this growth it would go to the townspeople’s heads or something.  Indeed it has:  in digital form, that is.  Rolesville’s mayor went on YouTube, the Parks and Recs here also have some video footage, and the greenway around Mill Bridge Nature Park connects with the Wake Forest greenways, which will eventually connect with the Main Street Park greenway….you get the idea.  They poised their town for family-friendly but business-minded growth.  Now there’s even talk about the possibility of gigabit internet for this little town, since its big sister Wake Forest is in the throws of this possibility.

So grab your coffee at that log-cabin-looking coffee shop, pick up dinner at that Food Lion, but definitely do what I did and explore…and don’t just roll through.