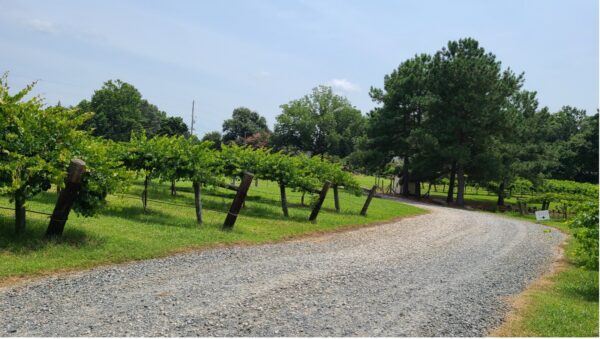 Of all the grapes grown in North Carolina, the Muscadine is perhaps the most closely tied to  North Carolina culture and its history. Given the grape’s substantial nutritional value as a low-calorie, low-fat source of fiber and certain vitamins and a strong preference among many Carolinians for sweeter, more fruity wines – although there are some Muscadine wines that are actually quite dry – it’s no wonder the wines are growing in popularity both in-state and nationwide.

Indigenous to the southeastern U.S. and often referred to as our nation’s very first cultivated grape, the Muscadine was first grown by Native Americans and provided to early colonists over 400 years ago both as a source of food and a source of blue dye. Sir Walter Raleigh himself, as he explored the Carolinas in the late 1500s, commented on the abundance of the grape growing on Roanoke Island. Although Roanoke’s oldest living vine, the “mother vine” – a Scuppernong varietal – did not take root until years after his visit, the 400-year old vine is a testament to the hardiness of the variety in North Carolina.

Not many people  realize that in the early 19th century North Carolina was one of our nation’s top wine producers. At that time, Muscadine grapes accounted for almost 100% of wine production in the state. Tyrell County’s mid-18th century “Big White Grape” cultivar – a cultivar being a vine that has been produced through a selective breeding process – was North Carolina’s first official Muscadine, which eventually came to be known as the Scuppernong. Today, large wineries such as Duplin – by far the largest Muscadine winery in the world – and  others like Childress, Cauble Creek and Shelton vineyards produce a variety of delicious wines out of the Scuppernong cultivar.

Instantly recognized by its very tough skin and the size of its fruit – a fully mature grape sometimes measures up to 1-1/2” in diameter – the Muscadine is also characterized by very distinct rough-edged, fairly small leaves on its vines. A Muscadine plant is best grown in an area of rich, sandy, organic soil with good drainage, 6-8 hours of sunlight per day, and enough room to easily spread out on a trellis or other vertical support. Pollinator plants, or those with so-called “perfect flowers” (with both male and female flower parts) are used to pollinate vines with “imperfect flowers” (those with female parts only) around them; when planting these vines, it’s important to carefully space them out so that pollination can easily take place. 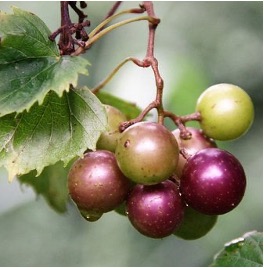 Muscadine grapes can broadly be broken down into white or bronze cultivars, and red ones. Interestingly, although there are as many as 50 varieties in existence, only a handful are used in the production of wine. Wines produced by both red and white grapes tend to be fruity and medium-bodied with high levels of acidity.

The vast majority of grapes grown in our state are of the bronze variety: specifically, the Carlos cultivar. This cold-tolerant, vigorous and low-maintenance vine produces grapes that are used mainly in the production of wine and juice but are also fresh consumed. The legendary Scuppernong, named after the Scuppernong River, thrives in moderate coastal climates throughout the south and produces not only fruity, delicate wines but wonderful  jams, jellies and preserves, too.

The most common red Muscadine grape, the Noble, also used in both wine and juice production, is another variety that is extremely hearty, productive, and disease resistant. The Noble grape, however, is not suitable for fresh consumption due to its “wet scar” – a mark on the fruit occurring as the grape falls from the wine, sometimes allowing mold to develop inside the fruit. For this reason, this grape needs to be more quickly processed than other varieties with “dry scars” where the fruit separates from the vine.

Several farms throughout North Carolina allow visitors to pick their own Muscadine grapes in the fall.

An organic grower of the Scuppernong varietal; also a “century farm,” or a farm that has been run for over 100 years by the same family. Open for U-pick in September/October.

An organic Haw River Valley farm also open for picking in September/October. The vineyard also sells Scuppernong and Muscadine products like jams, jellies and grape “must” – juice and crushed grapes used by small-scale wine makers in the production of wine.

For tips on North Carolina Land Sales, NC Land and Farms for Sale in Central North Carolina, NC Farms and Land for Sale, or Financing for NC Land, please contact the professionals at Legacy Farms and Ranches of N