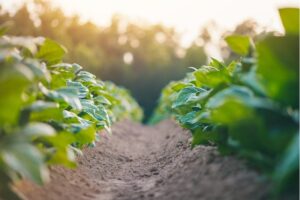 Climate change as a result of the burning of fossil fuels – gas, coal and oil – has become one of the most dire situations our world has had to contend with in the 20th and 21st centuries. How we deal with global emissions today will shape what kind of planet we’ll be living on in future generations.

Farmers can help in worldwide efforts to cut down on gas emissions by following certain carbon capturing processes and generating what are called ‘carbon credits,’ which are bought and sold on the carbon marketplace and allow companies that are heavy carbon producers to offset their greenhouse gas production.

Over the past 25 years, two important accords have shone a bright light on the plight of global warming. The Kyoto Protocol of 1997 was the first treaty of its kind that aimed to reduce greenhouse gases. Forty-one nations and the European Union committed to working toward a reduction in emissions through several approaches including the development of new technologies and programs in developed and less-developed nations, extensive tree planting, and the development of a system of trading credits that would allow an entity – a buyer – to produce a certain level of emissions.

In 2015, 195 countries and the European Union went a step further as they entered into an international treaty known as the Paris Agreement. The Paris Agreement was a proclamation on climate change that established certain social and economic practices that would create a carbon neutral world – one in which greenhouse gas emissions are reduced to a point where they are absorbed by the earth’s natural processes, thereby creating a “net zero” situation – by 2050. Signers of the Agreement, the world’s top producers of greenhouse gases, included the European Union, U.S. and China

By 2020, nations were tasked with providing their commitments to the agreement in the form of LT-LEDS, or ‘long-term low greenhouse gas emission development strategies’ as to how they intended to reduce emissions. The action plans included programs to finance these goals and pledges to share information amongst one another in an effort to avoid a situation in which emissions would reach a catastrophic level.  In 2020, the United States withdrew from the Paris Accord under then-President Donald Trump, but in 2021 newly-elected Joe Biden re-joined the Agreement, reiterating the U.S.’s commitment to addressing – and dealing with – the world’s dangerous, and growing, climate situation.

Some of the most important details of the U.S. commitment to reducing greenhouse gases are these:

Our state has taken its own steps toward creating a cleaner future, including the passage of a law – House Bill 951 – in October of 2021. The bill requires the North Carolina Utilities Commission to reduce emissions by as much as 70% by 2030, and to create what is called a state of “carbon neutrality” – balancing carbon emissions with the removal of carbon from the atmosphere – by 2050. Details of the complete plan are due to be finalized by December of 2022, and will involve energy efficiency measures, grid modernization, and the use of new technologies dealing with power generation, distribution and storage.

When farmers follow certain carbon farming practices, they sometimes receive payment for the carbon credits they generate by organizations specializing in the carbon market. Often these organizations turn around and sell the agricultural carbon credits to entities that support climate protection and are committed to reducing greenhouse gases. Many buyers, however, such as power plants and other large producers of greenhouse gases, purchase these credits in order to be able to continue to produce more emissions than they are legally allowed to.

Farmers generate these credits in one of two ways: either by reducing emissions, or by capturing and storing emissions.

Some of these practices turn out to be very costly for the farmer, but the financial return on selling agricultural carbon credits can also be substantial.

How to Get Started

The idea of generating agricultural carbon credits is daunting for some, but with a little bit of education and – for many – a true desire to see our world prosper by seeing a reduction in greenhouse gases and global warming, it’s a topic well worth discussion.

Farmers interested in getting involved in the carbon marketplace can do so in various ways.

To find out more about carbon credits in the state of North Carolina, here are some resources that provide all the information you need to get started.