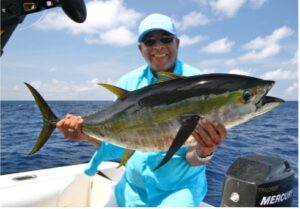 As if any of us needed an extra incentive to visit the Carolina coastline over the spectacular summer months, the next several weeks are considered by many to be the best time of year to go saltwater fishing for game fish such as Billfish, Mahi Mahi, Wahoo and Yellowfin. Many prime spots along the Outer Banks are at their peak in late summer and early fall, when temperatures in the warm waters of the Gulfstream, about 20 miles offshore, reach their peak. A number of charter fleets in Ocracoke, Hatteras, Nags Head, Manteo, Kitty Hawk and Duck offer fishing adventures that will let you experience the thrill of catching your own big fish in some of the world’s richest waters.

Bluefin, Blackfin and Yellowfin tuna are all abundant off North Carolina’s coast, but at this time of year, the Yellowfin is most active. Often found along the coastline of Hatteras and Nags Head, Yellowfin travel in schools, even with similarly sized fish of other species. Fighting aggressively if exposed to prey such as Ballyhoo, Mackerel, Squid or Sardines, these schools of Yellowfin – numbering into the hundreds, or even thousands – move from one area to another based on the availability of food and the water temperature. Typically weighing up to 100 pounds and sometimes a great deal more than that, the torpedo-shaped Yellowfin is silver on its underside but has both a dorsal fin and a line above that are both – as the name implies – bright yellow.

If your goal as a sport fisherman is to enjoy the hunt for the fish just as much as the catch, the Wahoo – a large, fast and beautiful fish with distinctive vertical stripes – will give you a thrill as you chase it through the waters off the Carolina coast. Wahoo, too, can be fished at any time of the year, but the best season to find Wahoo is typically late summer through September and even into early October. With a set of extremely sharp teeth and habit of feeding off crustaceans, Squid, and Mackerel, the Wahoo is considered a voracious predator and is classified as a pelagic fish, meaning it tends to prefer inhabiting open water, only coming to the surface in order to feed. As opposed to other members of the Mackerel family, whose flesh is oily and slightly stronger tasting, the highly valued meat of the Wahoo is sweet and dense with a delicate flavor.

The best areas to find these powerful fish are in the deep Gulfstream waters along North Carolina’s central coastline – the Crystal Coast – while the best method of catching them is trolling for them at a high speed, with bait mimicking the movements of prey. Unlike the Yellowfin, Wahoo are solitary fish and can often be found in very calm waters.

The dolphin fish, or Mahi Mahi, is plentiful year-round, but the best time to fish for it is when waters off the Carolina coast are at their warmest, through the month of August. Found primarily in deeper Gulfstream waters, the colorful Mahi Mahi travels in schools, but often closer to shore, and closer to the surface of the water than either Wahoo or Tuna. The best method of fishing for Mahi Mahi is by slowly trolling live bait such as Ballyhoo or minnows – the diet of the Mahi Mahi is primarily smaller fish – which makes fishing for Mahi Mahi ideal for fishing by families. Mahi Mahi can be aggressive, however, biting at almost any bait, alive or dead, that is dangled in front of them, and making spectacular, unpredictable jumps into the air that make fishing for them a thrilling experience.

The Mahi Mahi’s distinctive look includes vivid yellow, gold and blue coloring, a long dorsal fin from head to tail and a squared-off looking head. Some compare the mild and slightly sweet taste of Mahi Mahi to that of Cod or Halibut.

The Outer Banks are considered by many to be the Billfish capital of the world. Some of the largest fish in our oceans, Billfish – including Blue Marlin, White Marlin, Sailfish and Swordfish – feed off of crustaceans and smaller fish, and are characterized by their long, bony bills that they use to hunt prey, especially in schools. The best time to fish for these powerful fish is also August and September.

The process of catching such a large fish requires more than the simple effort of one lone angler, and typically includes setting up a number of poles at the back of the fishing boat with live, dead or artificial bait trailing along behind, luring the fish. The meat of the Marlin, Sailfish or Swordfish is only considered fair, as they are primarily trophy fish.