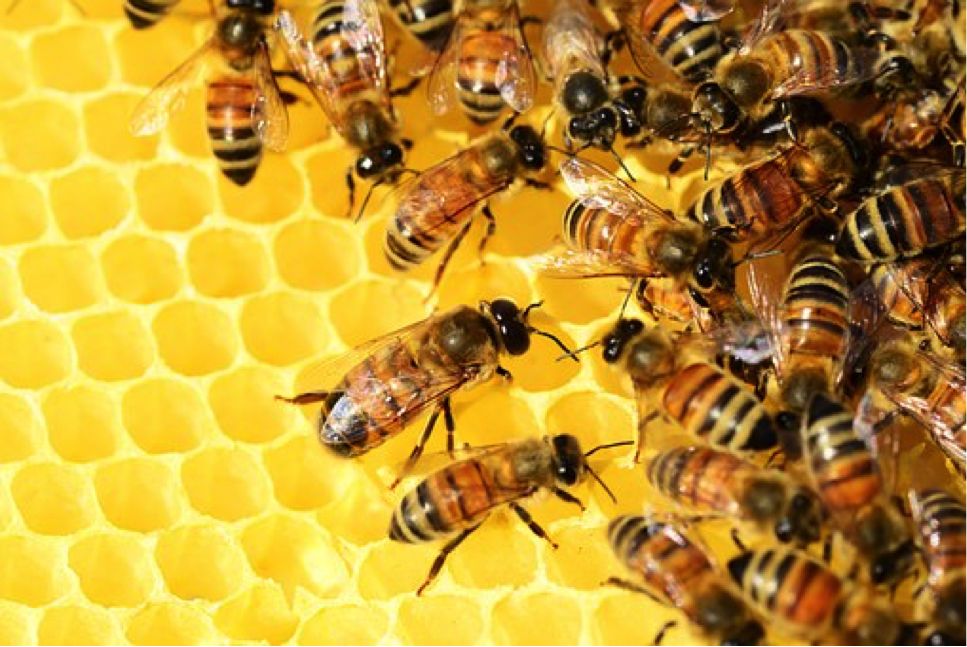 Our warm-climate neighbors to the south may beg to differ, but one of the true joys of living in North Carolina is experiencing the state’s four distinct seasons: spring, summer, fall and winter. There’s something about the inevitability of nature’s rhythms that makes us, as humans, appreciate that we are as much a part of the overall cycle of life as are the plants and animals that inhabit the world around us. One of the most telling signs of spring, of course, as days grow longer, is the almost magical reappearance of insects in the garden as they hatch, transform or awaken after months of near total inactivity. One of these insects is the honey bee.

We live in a fairly temperate climate, so not all insects in our geographical area hibernate – flies, for instance, tolerate the cold quite easily – but many insects spend winter months burrowed into the ground, into tree trunks or under rocks, where they are sheltered from the cold and protected from predators until temperatures start to rise. The honey bee is one insect that doesn’t entirely hibernate, but instead becomes almost completely dormant throughout the cooler winter months within its hive, or nest. There, the swarm surrounds the Queen in order to keep her safe from natural enemies such as bears, beetles, and yellow jackets, and they protect her from the cold by “shivering,” or vibrating, which raises the temperature of the hive – and the queen, at its center – considerably. Because there are few, if any, flowers blossoming over the winter months, the bees rely on the honey they’ve stored within the hive for energy and survival.

As temperatures increase, so does activity both inside and outside the hive. By the time the queen emerges in early spring, she is ready to start laying eggs again and re-establish the colony. Worker bees, who are all female, 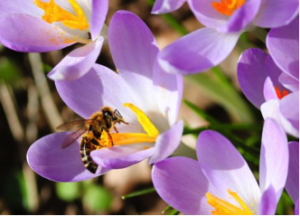 venture outside the nest searching for food sources – pollen and nectar – that will allow them to re-build their strength and feed other worker bees within the hive. When a bee has found an area such as a field that is especially abundant with flowers, she returns to the nest and does a type of dance in order to show her fellow worker bees exactly where the area can be found. The pollen that honey bees collect is mixed with nectar and water within their mouths and deposited into the honeycomb’s cells as a material called “bee bread.” Once the comb is full, the worker bees flap their wings in order to extract all the extra water out of the mixture – a process that results in the sweet, syrupy liquid we know as honey. At this point, the bees cover the nectar with a thin layer of wax and leave it stored until the following winter, when it will be needed for survival.

Pollen – that light and airy, yellowish powder that is oh-so-visible this time of year – is critical for fruit and seed production. The type of pollen we see these days coating anything and everything in our yards, on our automobiles, on our clothing, in our hair… is pine pollen, which is distributed from tree to tree on the wind. Flower pollen, however, is carried from plant to plant by honey bees and a few other pollinators such as butterflies, beetles and moths. In order for crops and other plants to develop and seed, they need to be pollinated. Honey bees transfer flower pollen via “pollen baskets” on the stiff hairs of their rear legs; lumpy, yellowish bits of pollen that are stored in these receptacles or stick to the bee’s body as she flies from flower to flower are often visible to the human eye.

The Economic Importance of the Honey Bee 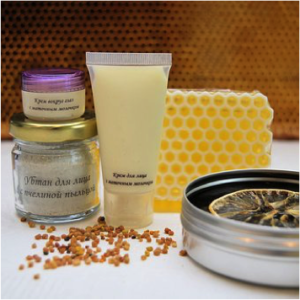 In North Carolina, honey bees are by far the most significant insect pollinator for “forage” crops – alfalfa, cotton and soybeans, for instance – and other food crops such as such as blueberries, apples melons, peaches, cucumbers and squash. To understand how critical the honey bee is to our economy and our food supply, it’s interesting to know that bees pollinate about a third of all food that human beings eat, and in North Carolina, many of the state’s crops could not be commercially maintained without honey bee pollination. Farmers sometimes strategically place hives in order to ensure the maximum number of pollinators in their fields, and even rent hives in order to do the job during the blooming period.

The History of the Honey Bee and Growth of Apiculture in the U.S.

The honey bee, incredibly, has been around for about 125 million years. As early as 6,000 BC, in Spain, humans began using the bee as a food source (honey), and other early civilizations in Africa, Europe, the Middle East and India soon followed suit, developed beekeeping centers that existed until the Roman Empire dissolved, around 400 AD. The introduction of the European Honey Bee to the U.S. by early European settlers contributed to a new industry, apiculture, that, during the 1800s, grew substantially with the inventions of the moveable-frame hive, the smoker, the comb foundation maker, and the honey extractor – all tools that continue to be widely used. Today, it is estimated that there are as many as 2-3 million honey producing colonies in the United States. North Carolina, with more beekeepers that any other state in the country, designated the honey bee the official state insect in 1973.

Most individuals in our state keep bees as a hobby, but many others have become involved in more commercial aspects of the beekeeping industry, in these areas and more: