While some annual events in our area might have been cancelled or scaled back this summer due to the ongoing (but improving) Covid situation, there are still plenty of opportunities to get out of the house for some fun – and safe – outdoor activities.

Raleigh’s Independence Day celebration is indeed spectacular, with massive displays at the PNC Arena, Carter-Finlay Stadium, and NC State Fairgrounds, as well as a 4th of July event on the grounds of the State Capitol and a fun street party downtown.

Wilmington’s Waterfront Park is the place to be for an unforgettable 4th of July fireworks display deployed from a barge in the middle of the Cape Fear River, just a short distance from the USS North Carolina. Although this year the historic downtown area will not be hosting the traditional food vendors and entertainers of years past, the city’s fireworks are typically some of the state’s most impressive.

Free tickets need to be reserved in advance for Durham’s 4th of July Laser Light Show at Durham County Memorial Stadium. Attendees are allowed to watch from their cars or from chairs set up directly in front of their vehicles, in reserved parking spots. Food trucks will be on hand, and the fireworks themselves will get started immediately following the July 4th Durham Bulls baseball game. The game starts at 6pm; laser light show at 9pm.

Raleigh’s “The Best of North Hills – A Comeback Tour” is a celebration of the return of live Motown, oldies, beach music and R&B through mid-summer (May 27 – July 22), then on into autumn starting August 13. Tickets are $10 to these fun Thursday night musical events taking place at the Coastal Credit Union Midtown Park. 100% of proceeds are donated to local charities.

Pittsboro’s Summer Music Series takes place each Saturday evening through June 26 at the Carolina Brewery (120 Lowes Drive, #100), with performers taking to the stage between 5:30 and 8pm. Some of this year’s most anticipated groups include New Orleans-style jazz musicians “New Orleans Masquerade,” and renowned blues performers “Robichaux, Reynolds and Rosebrock.” 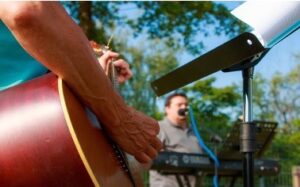 Downtown Raleigh’s “Noon Tunes at City Plaza” is a free concert series sponsored by the Duke Energy Center for Performing Arts each Wednesday. Pack a sack lunch and enjoy some lively tunes, dancing and other live performances – including acts presented by the Carolina Ballet and NC Opera – between Noon and 1pm at City Plaza.

Many people are unaware of the rich cultural history of Roanoke Island and the Fort Raleigh National Historic Site, or the many activities and resources that are open to the public there. Besides very visitor-friendly art galleries, cafes and an aquarium, an outdoor theater at Roanoke Island’s Waterside Theatre hosts Monday-Saturday evening symphonic performances – The Lost Colony Outdoor Drama – depicting the story of the late 16th century English settlement that mysteriously disappeared between the year of settlement – 1587 – and the date on which English ships returned to the area with supplies, just three years later.

Funds raised from The Lost Colony’s Wine, Beer & Culinary Festival, September 24-26, support this outdoor drama, which happens to be our nation’s longest-running outdoor production. Chefs and local restaurants will offer food samples and wine pairing events, while North Carolina vineyards will be on hand to introduce guests to several delicious regional wines.

Murfreesboro’s 36th Annual NC Watermelon Festival, Aug 4-7, 2021, promises four full days of rides, parades, races and more including the much-anticipated Little Farmer and Little Miss Farmer competitions and an autograph signing by the one and only NC Watermelon Queen! This is a true community-wide event, with several live local musical performances, home-cooked food and – of course – mountains of sweet, juicy watermelon.

Cary’s popular Lazy Daze Arts & Crafts Festival takes place in late summer – August 28/29 in 2021 – on Academy Street at Town Hall. Featuring scores of artists, food vendors and live musicians, the Festival welcomes thousands of visitors each year who are interested in dabbling in the culinary or visual arts, visiting local exhibits and galleries, or simply strolling the festival seeing what’s going on in the world of arts and crafts.

For tips on North Carolina Land Sales, NC Land and Farms for Sale in Central North Carolina, NC Farms and Land for Sale, or Financing for NC Land, please contact the professionals at Legacy Farms and Ranches of North Carol