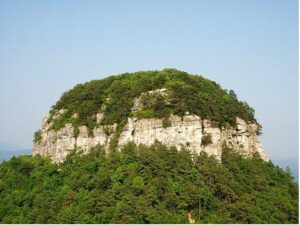 Over 120,000 North Carolinians – or around 2% of the population – are Native American, belonging to eight recognized tribes. The impact these indigenous peoples have had on our culture has been substantial, from river, mountain and town names to increased recognition of cultural identity and human rights for the largest Native American population east of the Mississippi. Much can be learned about this segment of society by visiting any of a number of interesting sites and museums from the mountains to the coast.

Native Americans first inhabited what is now North Carolina during the Ice Age, around 12,000 years ago, hunting and fishing with spears and living a largely nomadic life. As they started living in groups, moving each season as food became more or less available, they began developing a culture that included wearing clothing and jewelry for religious or other purposes, using plants as medicine, and creating tools such as the ‘atlatl’ (spear), fishhooks and axes.

From around 1,000 BC to about when Europeans started arriving in the mid-17th century, various groups, or tribes, began developing settlements where they would remain through certain hunting and growing seasons. As many as 100,000 Native Americans were inhabiting the area by the time the first Spanish explorers arrived in the mid-1600s. As they began interacting with other tribes throughout the North Carolina/South Carolina region and with more European settlers, battles took place and disease, slavery and the destruction of native settlements caused a decline in these populations.

Today, any individual who is interested in becoming a recognized member of a specific tribe must follow certain guidelines which include being able to produce a certificate from the Bureau of Indian Affairs (BIA) detailing their blood background. The process is not always easy as family tribal records are often incomplete, but as use of the Internet has exploded, genealogical records have also become more available, making the process much easier.

Cherokee, North Carolina. Western North Carolina is home to the town of Cherokee, the capital of the only Cherokee tribe recognized in North Carolina – the Eastern Band of Cherokee Indians. Considered a sovereign nation, Cherokee is a tourist destination known for its close proximity to the Great Smoky Mountains National Park and the Blue Ridge Parkway; the dramatic nighttime outdoor drama “Unto These Hills”; Harrah’s Cherokee Casino Resort; and outstanding hunting, fishing and other local sports such as tubing and hiking. The Oconaluftee Indian Village gives visitors the opportunity to experience life in 1760s Cherokee through cultural dances and interactions with villagers performing everyday activities such as sculpting, basket weaving and beading.

Town Creek Indian Mound. Located outside of Mount Gilead in central North Carolina, the Town Creek Indian Mound is a prehistoric archaeological site where the Pee Dee culture established a ceremonial center overlooking the intersection of Town Creek and Little River. Religious ceremonies and feasts took place here, and many notable tribal members died and were buried here, too. Excavations at the site have been taking place since 1937, and today the site remains the only one in the state to be dedicated to Native American heritage.

The Lost Colony / Manteo, NC. The focus of the outstanding “Lost Colony Experience” outdoor show is what may have happened to the 117 men, women and children who so mysteriously disappeared from one of the first North American settlements, on Roanoke Island. One hypothesis speculates that the group may have moved inland from shore, perhaps out of desperation due to hunger or disease, and become absorbed into one of the many native American tribes in the area at the time: the Pamlico, Cape Fear, Chowanoke, Roanoke, Coree or Machupunga. Other theories exist based on the word “Croatan” carved into a post of the deserted area which suggest that the colonists may have been killed or abducted by that tribe.

A Lost Colony pre-show performance by native American cast members entertains the audience with stories, singing and dancing reflective of tribal culture unique to this geographical region and period. 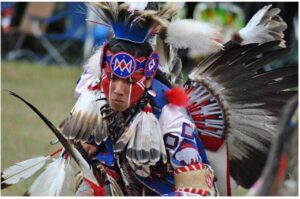 North Carolina Pow Wows. A pow wow is a gathering of tribal members who assemble to socialize and celebrate ancestors and culture through a tradition of rich storytelling. The singing and dancing that takes place during one of these sacred events is extremely important, as are the traditional outfits worn by the participants. Beginning with the Grand Entry through the commemoration of native ancestors and rounds of dances and singing, the pow wow typically ends up as an occasion where all visitors participate by dancing to the beat of the tribal drummer. A couple of the more well-known North Carolina pow wows include the Guilford Native American Association Annual Pow Wow, happening this year September 16-18 in Greensboro, and the Onslow Veterans Pow Wow 2022, taking place November 5-6 in Jacksonville.

Some of the many spiritually significant locations for Native Americans in North Carolina include these two mountain landmarks.