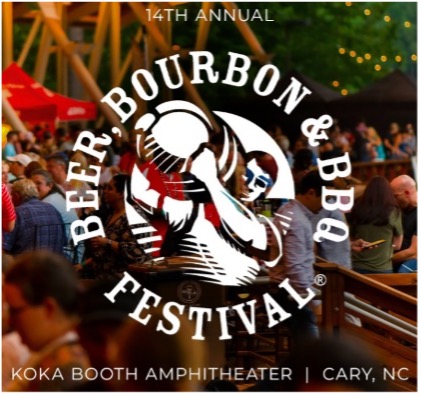 From the coastal plains to the Blue Ridge Mountains, one thing is certain… there aren’t many states where such a focus is placed on a singular type of cuisine, and in our state, that unique cuisine is pulled-pork barbecue. Several annual events celebrate this most delicious part of our culture, including the epic Beer, Bourbon & BBQ Festival, at Cary’s Koka Booth Amphitheater.

One of the state’s largest festivals is back – two days of eating, drinking, sipping and listening to some of the best bluegrass around – and is THE event of the year for anyone who appreciates great barbecue,  bourbon, beer and live entertainment, all rolled into one fun two-day party. A variety of ticket packages for those who wish to attend one or both days include plenty of tastings presented by distillers, brewers and pit-masters from all over the south, while individual meat, beer and shopping tents and an outdoor area for cigar smoking offer something for every member of your group.  *Purchase tickets here.

Did you know that in the late 1800s, two hogs existed for every human being in North Carolina? Although that statistic has changed, obviously, as our population has grown, today there are still more hogs than humans within our state’s borders. The pork-processing and other peripheral industries contribute more than $10 billion and over 40,000 jobs to our economy, particularly in more rural counties: Bladen County, where the world’s largest pork processing plant is located; Sampson County, where pork-processing accounts for about a quarter of the county’s employment; Wayne County, where the pork industry creates an economic impact of over $230 million annually; and Duplin County, the state’s largest hog-producing county of all.

There’s nothing revolutionary about the idea of slow-cooking meat over an indirect flame, but the process involved in preparing the meat beforehand, then cooking and adding sauce to it afterward is unique here. Smoking the meat over hickory, pecan, oak, maple or other aromatic wood chips provides flavor and color to the meat and is followed by cooking it “low and slow” until it literally falls off the bone in delicious shreds or chunks. Although the cooking part of the process can take place in the oven, many use the smoking box of their grill and a pack of wood chips to achieve that same smoky flavor, or even leave the pork in the smoker the entire cooking time for a particularly tender and smoky piece of meat. Pork shoulder, naturally dense, requires several hours to cook through and become fall-off-the-bone tender. 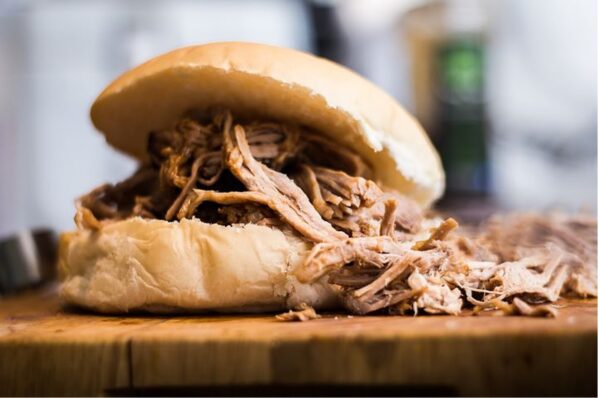 Ask any two people in our state to tell you what it is exactly that makes North Carolina barbecue so special, and you’re likely to get two very different answers. Generally-speaking, however, there are two main regional types of pork barbecue that are based on the cut of pork used and the type of sauce added at the end.

There are hundreds of mom-and-pop eateries and other, slightly more upscale barbecue establishments across our state, but for a great list of some of the most barbecue-rich towns and regions of NC, check out the North Carolina Barbecue Society’s own Historic Barbecue Trail, stretching from the westernmost corner of North Carolina all the way to Greenville. Start at one end and work your way to the other, or just pick a stop and check out that town’s barbecue pit and the amazing product it serves. Some of these spots might not be the most beautiful restaurants in the world but they certainly are among the best of the best in terms of the BBQ they serve.