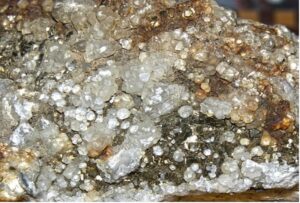 Did you know that North Carolina is the nation’s top producer of industrial minerals like feldspar and mica and is also number one in the U.S. in the production of the clay used in manufacturing bricks? The geology of our state, with its abundance of rock types, ancient mountains and long coastline shaped by sedimentary erosion, has created a complex environment that is rich in minerals and other natural resources. In fact, North Carolina ranks in the top 40% of industrial mineral producers in the nation.

Over a period of hundreds of millions of years, ancient landmasses in what is now the southeastern United States collided, forcing the Earth’s crust upward and resulting in the mammoth Appalachian mountain range. The oldest rocks ever found in North Carolina were located here, at the edges of these shifting plates. Rain, snow and wind wore away at these mountain peaks over the eons, washing sediment eastward toward the ocean and creating what is now the state’s long, sandy coastline, an area of abundant mineral resources.

Geologically speaking, the state of North Carolina can be divided into three zones, or landforms.

Feldspar. First mined around a century ago, feldspar is used in the manufacturing of glass fiber insulation, tile and what is known as “whiteware,” or ceramic products that are white or close to white in appearance.

Mica. Although North Carolina produced primarily sheet mica for several years, other materials have replaced that product on the market. Today, North Carolina mines scrap mica only; dry-ground mica goes into the production of plasterboard joint cement and wall board, whereas wet-ground mica is a component of many cosmetics, plastics and paints.

Lithium. Over 80% of the nation’s lithium ore deposits are found in Cleveland and Gaston counties. A component of lithium metals, carbonates and other chemical compounds, lithium also goes into the production of batteries, glass, grease and ceramics.

Phosphate. Second only to Florida as a producer of phosphate, this mineral is mined in one place only, Beaufort County’s Lee Creek mine, and is used primarily in the production of phosphoric acid and in fertilizers such as triple superphosphate and diammonium phosphate.

Pyrophyllite and Talc. Pyrophyllite, used mainly in the production of ceramics, paint and insecticides, is mined in Moore and Orange counties. Talc mines in Cherokee and Swain counties, although heavily mined in the past, are now inactive.

Clay. Used in the production of various types of tile, brick, cement, sewer pipe and lightweight aggregate, common clay is found in all three regions of the state.

Gemstones. A wide range of precious and semi-precious gemstones are found in our state – mainly in the Piedmont and mountain regions – and a few mining areas are even open to the public. North Carolina is the largest miner and marketer of gemstones in the eastern half of the U.S. 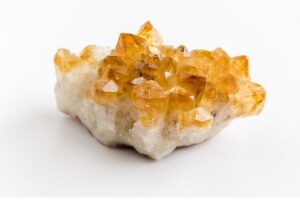 North Carolina’s resources in the area of mineral fuels are limited, although several areas have the potential to produce energy in the future. Over a hundred petroleum and natural gas wells are situated primarily throughout the outer Coastal Plain, with its heavy layer of sedimentary rock, but although traces of each have been obtained in some wells, none are considered producing wells. Coastal North Carolina also features around 675,000 acres of fuel-grade peat, an ingredient that has been used almost solely in the production of potting soil and soil conditioners. North Carolina’s coal beds – mainly, the Deep River coal field along Chatham, Moore and Lee counties’ Deep River – are no longer producing following various periods of mining activity over the past century and a half. Talc, Lithium batteries, Citrine

Enjoy interactive exhibits, displays and more at one of these museums dedicated to North Carolina’s rich mineral resources and mining and gem industries.