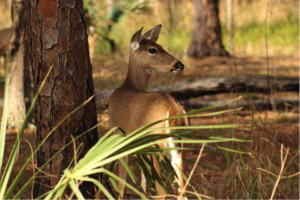 With the first day of North Carolina deer hunting season little more than a month away – in most zones archery season starts on or around September 7 – it pays to be aware of hunting rules and to familiarize yourself with some tips and tactics that will help you get the most out of your 2019 deer hunting experience.

Archery season kicks off fall hunting on September 7th for a period of between 3 weeks in the Northeastern and Southeastern zones of the state to 10 weeks or more in the wild western part of North Carolina. Blackpowder and gun hunting seasons follow shortly thereafter, and on one special date, Youth Deer Hunting Day – September 28, in 2019 – individuals under the age of 18 may hunt deer using any legal weapon to do so, although adults 18 and older are only allowed to use the weapon that is legal for the season.

Some of the most basic rules and regulations for deer hunting season are the following:

Exceptions to these rules include –

North Carolina’s Wildlife Resources Commission oversees over 2,000,000 acres of both public and private lands in our state for the purpose of hunting, trapping and inland fishing. In addition to a standard hunting license, a permit is required through the Commission to hunt, trap, train dogs or participate in field trials (events in which hunting dogs compete with one another) on game lands. Seasonal hunting dates apply to public and private game lands just as they do elsewhere in the state, though motorized vehicles on game lands are only allowed in areas in which they are specifically allowed. Finally, it is against the law to discharge a weapon on public or private game lands from a vehicle or within 150 yards of any residence or official building. Firearms may be carried either openly or concealed, with a valid concealed handgun permit.

Some municipalities now allow periodic deer hunting in order to reduce deer populations in their cities and towns. Certain public areas within those zones allow for the harvesting of deer of either sex, with seasonal bag and possession limits applying just as they do for the general archery season. Private landowners are under no obligation to allow hunting on their property during Urban Archery Season, but with proper written permission, hunters may utilize private lands.

It’s important to be prepared during the season with the proper equipment, which may include the following.