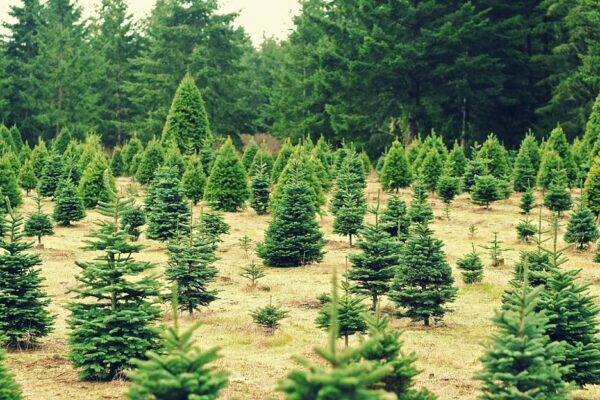 An astounding 850 growers across each of North Carolina’s 100 counties harvest between 5 and 6 million Christmas trees annually, shipping them to Christmas tree lots and other vendors nationwide to sell over a brief six-week period prior to the holidays. Bringing in an estimated $90 million in revenue annually, the state’s Christmas tree industry is second in size only to Oregon’s and is responsible for supplying more than 20% of the Christmas trees sold throughout the country.

Queen of the Forest: The Fraser Fir

The jewel in the crown of North Carolina’s Christmas tree industry is the elegant Fraser fir. Popular for its ideal symmetrical shape, magnificent fragrance and firm needles that don’t drop as quickly as those of other species, the Fraser fir is grown primarily for the commercial market, as millions of the tree are shipped throughout the nation. Native to the Appalachian Mountains, the tree grows best in a climate that is cool and moist, but at a slower pace than many other trees; a fully mature tree will take between seven and ten years to reach a height of 6-7 feet. Over 90% of the Christmas trees grown in the state are Fraser fir, making it not only the most abundant tree but also, according to many, the most iconic Christmas tree on the market.

Other trees grown throughout the state include the pretty Leyland cypress, grown primarily along the coast and in the Piedmont region; the Easter white pine with its long, soft, feathery needles and delicate branches; the Arizona cypress, with soft, pale to grayish-green needles and a scent that is more citrusy that other trees; and the dense, aromatic “Green Giant,” with a vibrant green color and pleasing pyramid shape.

History of the Christmas Tree

Throughout history, various civilizations have used symbols of nature in their homes during ceremonies or as cultural symbols. Romans decorated their environment with evergreen boughs as the winter solstice approached, symbolizing a new growing season to come. Ancient Egyptians also used greens during the winter solstice period, using green palm rushes, which symbolized the triumph of life over death in their celebrations of Ra, the Sun God. German Protestant Christians first brought trees into their houses and decorated them with candles in the 16th century; this was also the period during which the first “Tannenbaum” songs were composed. Emigrants from Germany, it is widely believed, were responsible for bringing the tradition with them to the New World – to America – in the mid-1800s.

The tradition of having a live, decorated tree in the house was not adopted overnight in places like New England, where there was a large Puritan population that considered the practice pagan. During the 19th century, however, the tradition of a holiday tree grew in places like northern Europe and became popular in the U.S. as the number of Germany and Irish immigrants grew and Christmas ornaments from those areas started to be imported. In the early 1900s most tree decorations consisted of homemade ornaments, strings of popcorn, nuts and berries, and other handmade decorations including apples, nuts and cookies. Town squares began featuring their own trees, and soon the Christmas tree became commonplace in many American homes.

In 1889, President Benjamin Harrison was the first President to put up a Christmas tree in the White House: a tradition that has continued until today. In 1929, First Lady Lou Henry Hoover was the first to decorate the tree, and starting in 1961, First Lady Jacqueline Kennedy chose a theme for the tree – Nutcracker Suite – for the first time ever. In 1966 the delivery of the tree started being a bit more celebratory, with the tree being delivered to the North Portico of the White House on a carriage drawn by jingle bell-wearing horses.

Since 1961, a total of 14 trees from North Carolina have decorated the White House – the greatest number of trees from any one state. The first North Carolina tree to grace the White House’s Blue Room was in 1961, and the most recent in 2021, when Ashe County’s Peak Tree Farm furnished a massive 20-foot Fraser fir … for the third time (2008, 2012)!

This year, the U.S. Capitol tree is also from North Carolina. A 78-foot red spruce named “Ruby” was harvested in the Pisgah National Forest and will be placed on the Capitol lawn. Following another tradition that started in the early 1960s, the selection of the “People’s Tree” differs from the White House tree in that it is always supplied from a different national forest, by the U.S. Forest Service.

There are a number of Christmas tree farms across North Carolina that offer visitors opportunities to spend an afternoon shopping, enjoying wagon rides, music or special holiday foods, or simply spending time roaming amongst acres of stunning, stately trees.