As winter winds down and ocean waters along the Carolina coast begin the slow process of warming with the approach of longer, sunnier days, so does the oyster season draw to a close, on March 31st. A roaring fire, clouds of salty steam, the challenging prospect of prying open that final stubborn shell might not be for everyone, but as far as casual outdoor family fun goes during our chillier winter months, the delicious joy of an oyster roast cannot be beat.

North Carolina’s magnificent golden shoreline offers recreational opportunities including swimming, boating, and fishing, but did you know that some of the Atlantic coastline’s most prolific oyster beds are found in the intertidal areas and shallow waters of much of our coast? Oyster beds are areas under the sea where the shellfish breed and grow naturally, and in our state those habitats range from low reefs in intertidal waters to reefs along the salt marshes of our estuarine shorelines and the deep-water reefs of the Pamlico Sound. North Carolina is unique in that we are the only Atlantic state with such a wide range of reef environments.

The social, economic, and ecological benefits that oysters and oyster reefs provide are often referred to as the “Three F’s” –

Oyster reefs also help control erosion along our shorelines and are important indicator of the state of the shoreline overall; if a reef is not thriving, chances are the coastal ecosystem as a whole is being affected by a bigger issue.

Historical, Economic and Cultural Impact of the North Carolina Oyster

Mounds of ancient oyster shells have often been found on Ocracoke Island where Hatteras and Woccon tribal settlements once were located, showing us that the oyster has long been an important food source and possible trade commodity in our state. It wasn’t until the late 1800s that the popularity of the new seafood delicacy exploded, at which point trainloads of the shellfish began being shipped to cities as far away as New York, Chicago and San Francisco. Oyster reefs were first mapped and oyster harvesting reached its peak in the 1890s. Over the decades since, the numbers of oysters harvested each year have diminished due to a combination of over-harvesting, 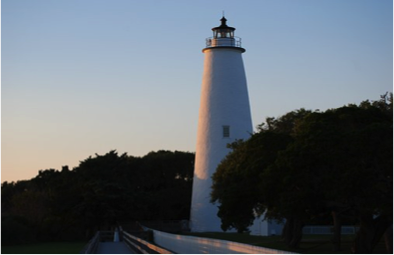 oyster disease, and natural disaster, but those figures started to increase again in the mid-1990s as water quality improved and increased measures to preserve and re-build reefs began going into effect. Today, North Carolina’s Division of Marine Fisheries has even deemed certain reefs permanent “no-take” oyster sanctuaries in the deep waters of Pamlico Sound, and has continued to list the oyster as a “species of concern” year after year.

Interestingly, there is a substantial difference between the appearance, taste and texture of an oyster harvested on the West Coast of the United States and one found along the Eastern Seaboard. Because the salt water in each region is made up its own blend of plankton, salt and minerals, the nutrients consumed by each oyster is unique. These variables even affect the size, taste, and texture of oysters from North to South along each coastline. Whereas a West Coast oyster tends to be sweeter and plumper, with a shell that is deeper, rounder and more jagged, an East Coast oyster is more chewy and has a briny taste, with a shell that is smoother and more narrow. Northern oysters are slower to grow and are generally more tender, whereas southern oysters – such as those in North Carolina – tend to be larger, shellfish with a texture and firmness that makes them ideal for grilling. 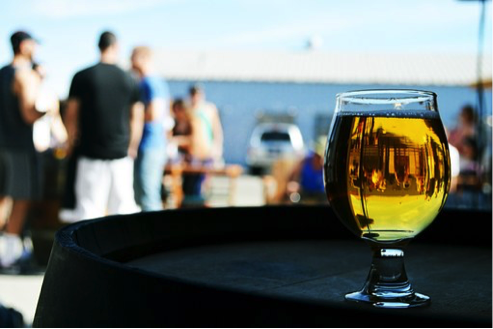 Oyster season starts in mid-October of each year and extends through the end of March. Recreational hand harvesting during this period is allowed 24/7 and requires no proper fishing license, whereas commercial fishermen are allowed to harvest Monday through Friday, sunup to sundown, and only with a proper fishing license. No oyster less than 3 inches in length is ever allowed to be harvested by either a recreational or commercial fisherman. During oyster season, the public is provided with drop-off sites for the shells of oysters that have been shucked, which are recycled back into the waters to provide an important habitat for the growth of more oysters and countless other organisms that thrive in that coastal environment.

It may sound like common sense, but it’s critical to remember that an oyster consumed that has not been properly refrigerated, cleaned or cooked can impose some very serious health risks. Refrigeration – storing the oysters at 45 degrees or below – ensures that any bacteria that do exist do not multiply, and cooking the oyster destroys any remaining harmful bacteria that the oyster may have absorbed during the filtering process. It is also important to thoroughly clean your oyster catch of any contaminant-filled sediment. Most oyster vendors will do this for you, for a small fee. 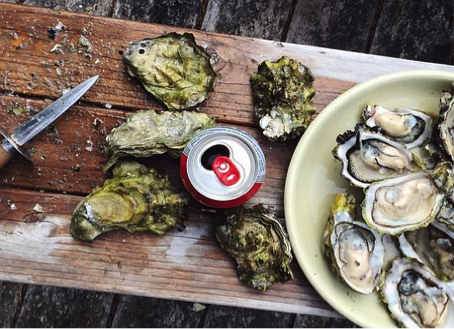 The cooking process itself involves cleaning the oysters and placing them on a metal sheet over an open fire or grill, then covering the pile with a wet burlap sack or towel until the steam underneath cooks the oysters and forces their shells to pop open. After 8 or 10 minutes the oysters are transferred to tables often covered with newspaper, where they are immediately, sometimes voraciously, consumed, often along with a good beer, wine or cocktail.

The Southern tradition of an oyster roast is deeply ingrained into the culture of our state. Whether you’re lucky enough to experience the adventure of harvesting your own oysters or you choose to purchase your “catch” from a neighborhood vendor, to share a meal of something as simple and delicious as a mound of perfectly-grilled oysters with family and friends is nothing short of the perfect late-winter get-together. Bon appetit!

For more information on the rules and regulations of oyster harvesting, North Carolina oyster festivals, the history of oysters in NC or how to throw an incredible oyster roast of your own, check out the following informative websites: