Overview: While there was some significant economic data released over the past week, the market impact was minor, and mortgage rates ended the week with little change.

The Fed keeps a close eye on the level of inflation, and the most recent data indicates that it has been rising in recent months. The Consumer Price Index (CPI), the most closely watched monthly inflation report, looks at the price change for finished goods and services. Core CPI, which excludes the volatile food and energy components, was 2.3% higher in June, up from an annual rate of increase of 2.2% last month. This was the highest level since January 2017.

Another recent major economic release contained good news for the economy. Consumer spending accounts for about 70% of economic activity in the U.S., and the retail sales data is a key indicator of growth. Monday’s report showed that retail sales remained strong, with a very solid increase in June of 0.5% from May. In addition, the May results were revised much higher from an increase of 0.8% to 1.3%, which makes it the largest monthly increase since September 2017.

The housing sector data released over the past week was far less encouraging. In June, housing starts declined 12% from May to the lowest level since September 2017. Single-family housing starts reached a 10-year peak in November 2017, but have lost momentum since then. Home builders cite rising labor and material costs as obstacles to faster growth.

Week Ahead
Looking ahead, the Existing Home Sales report will be released on July 23, followed by the New Home Sales report on July 25. The Durable Goods report, an important indicator of economic activity, will come out on July 26. The first reading for second-quarter gross domestic product (GDP), the broadest measure of economic growth, will be released on July 27. In addition, there will be a European Central Bank meeting on July 26, which could influence U.S. mortgage rates. 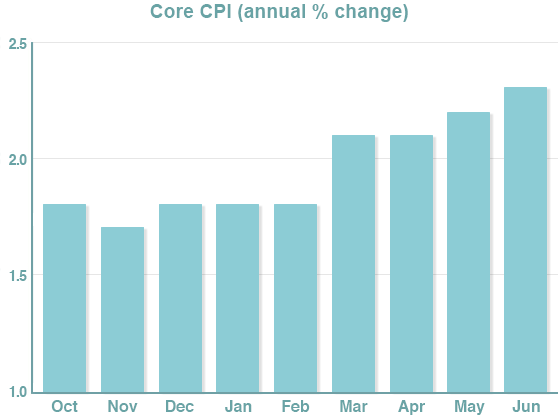 If you are looking for a lender, give Steve a call!