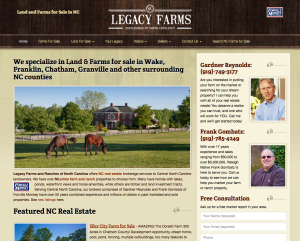 Nothing quite underlines and supports the overall fiscal health of a country like land. Good open land, rich in detritus over decades of cultivation, supports row crops like field corn, soybeans, wheat and rye, all of which add directly to a nation’s supply of commodity foods. Other row crops, like peanuts, cotton, tobacco, and sugar cane, re-enter the commodity stream as manufactured items like cloth, oil, cigars, and processed sugar. All, as bulk or processed products, contribute heavily to the kind of crop diversity essential to a nation which is self-sustaining.

What else makes North Carolina farmland desirable, either as cropland or tillable land, or as an investment? One item is diversity. Production of food, of fiber or wood products, and of meat, milk and dairy, puts North Carolina No. 7 nationally in terms of farm profits, for more than $3.3 billion dollars annually via a vast net of 80 different commodities grown on a quarter of the state’s total acreage.

And the other item lending strength to North Carolina land prices? Climate, of course! Nowhere else in the contiguous U.S. can one find the range and scope of micro-climates, from the inner and outer coastal plains to the Piedmont and the Blue Ridge Mountains. Somewhere within this array, all of which support agreeable, even clement summer and winter temperatures, can be found the perfect weather for the retiree, and the perfect financial climate for the canny land investor looking for a product that will appreciate over time in spite of climate change.