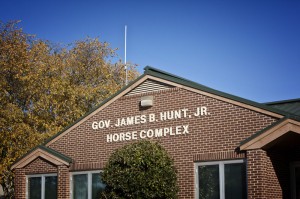 North Carolina enjoys a high-growth, thriving equestrian culture.  From the 2009 General Assembly report, the equine industry includes 53,000 horse-owning households, generating $1.9 billion in related gross domestic product in North Carolina each year.   That number is increasing significantly because of a trend of migration to North Carolina within the horse community springing from the temperate climate, low cost of living, veterinary care and training from NC State University and amenities afforded horse owners for the more than 500 shows across the state each year.  To accommodate the increase, there are major venues across the state:  Western North Carolina Agricultural Center in Asheville, the Senator Bob Martin Eastern North Carolina Agricultural Center in Williamston and the Jim Hunt Horse Complex in Raleigh.

Completed in 1983, the Jim Hunt Horse Complex hosts hundreds of events each year.  One event, the North Carolina State Fair Horse Show, is one of the largest all-breed shows in the nation.  On average, 2,400 head of horses have competed over the two-week-plus event during the last several years.  Another event – one for charity – The Duke Children’s Classic Horse Show – occurs each late fall/early winter.  World-class jumpers compete every year during the Grand Prix Classic and raise tens of thousands of dollars for the Children’s Hospital at Duke University.

The Jim Hunt Horse Complex has 485 permanent stalls, 100 temporary stalls, an indoor heated arena, outdoor covered show area, and several more show rings.  Within the 344-acre state fairgrounds, 30 acres are fenced for the Horse Complex.  Its dining facility accommodates 200 and can be rented when not in use for the arena’s main events.   The arena houses more than 4700 permanent seats.   Check this calendar for upcoming events:  click here.