Big Changes in Store for the 2021 NC Striper Fishing Season

As warm weather and longer days slowly but thankfully return, it’s time to look forward to springtime striped bass – or ‘striper’ – harvest season on the Roanoke River, and a few critical changes that are bound to affect your 2021 fishing plans.

The History of Striped Bass on the Roanoke 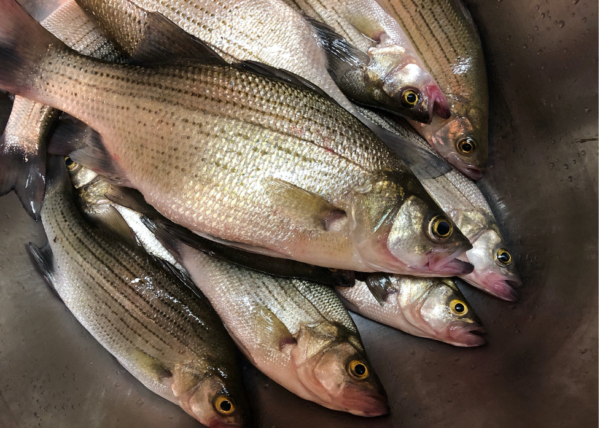 The striped bass, a silver-white fish with several distinctive horizontal stripes along its sides and an adult size of up to 3 feet and 20 pounds, is one of North Carolina’s most common fish species, and one of the most popular game and food fishes in the United States. North Carolina’s population of stripers is among the largest on the East Coast. One of the most unique features of the striped bass is the fact that it is an anadromous fish, or one that lives in saltwater – the Albemarle Sound – for most of its life but returns to its birthing location in the Roanoke River to spawn.

The striper was so popular as a game fish in the Albemarle Sound in the past – once growing up to 5-6 feet in length and weighing as much as 125 pounds – that between the 1890s and 1940s its numbers plummeted. In the mid-1900s, two additional things happened to threaten the species; commercial fishing expanded very quickly, and water quality in North Carolina’s coastal regions suffered from rapid expansions of agriculture, industry, and urban development. As a result, by the 1960s the populations of striped bass had dwindled considerably. It wasn’t until the 1970s that stricter controls on harvesting the fish were implemented on North Carolina’s rivers and the Albemarle Sound, and in 1997, the Roanoke River / Albemarle Sound habitat was officially declared ‘restored’ in terms of the population of striped bass. Today, the striper can be found on the Tar-Pamlico, Cape Fear, Neuse and White Oak rivers and in reservoirs including Lake Gaston, Jordan Lake and Lake Norman, but the primary spawning river for striped bass in our state is the Roanoke. Each year surveys on spawning and harvesting conducted by the North Carolina Wildlife Resources Commission are implemented to ensure that the population of striped bass remains at a good and sustainable level.

In the springtime, once waters reach a temperature of between 62 and 70 degrees – generally speaking, in March – adult stripers make their way from the Albemarle Sound to the mouth of the inlet near Plymouth, and then up the Roanoke for about 130 miles to the Weldon, NC area, where they were born. Here, female stripers release up to two million eggs within one spawning season, and males fertilize them. Once the eggs are fertilized, they float in the water for 2-3 days, hatch, and are finally carried by the current back down the river to the lower Roanoke and parts of the Albemarle Sound; incredibly, less than 1% of these striper hatchlings survive this journey. For up to four years, these young fish live and grow in the Sound, but eventually, once sexually mature – the males at around 2 years of age, the females at 3-4 years old – they make their way back up the Roanoke to spawn on their own, a cycle they’ll repeat for up to 20 years.

Because of a recent drop in the striper population due to over-fishing, the number of young, baby striped bass has also decreased. North Carolina’s Fisheries Reform Act of 1997 requires that when over-fishing is occurring, certain steps must be taken to reverse that trend over a 2-year period of time, and the population must be entirely recovered with ten years. A Stock Assessment Model used by the NCWRC has also determined that spawning has been affected by flooding in the Upper Roanoke over several recent springtime fishing seasons, which has greatly reduced the number of eggs that are able to be transported down the Roanoke and into the Albemarle Sound.

The Stock Assessment Model also calculates the maximum number of stripers that may be caught each year – the quota – in order to maintain a sustainable population of the fish. For 2021, this quota has been set at just 51,200 pounds. 50% of this figure will be applied to the Albemarle Sound commercial fishery, and the remaining 50% split between recreational fishing in the Sound and fishing in the Roanoke River Management Area. From last year to this, the Roanoke River limit has dropped from 68,750 to just 12,800 pounds.

The 2021 harvest season in the Roanoke River Management Area will now take place over just two weeks in April, and in two separate sections of the river – Lower and Upper – so that anglers with preferences in one area or the other will have a time to fish. Weeks selected for each of these areas were based on data collected over the past nine seasons.

Catch-and-release fishing, allowed between April 1 and June 30, allows anglers to enjoy fishing while keeping the number of harvested fish at a reasonable level. However, at least six fish out of every 100 caught and released dies on average, and when the water temperature approaches 70 degrees, the mortality rate jumps to almost 25%. The NCWRC also takes this information into consideration when calculating the fishing quota. Keep in mind these tips when catching and successfully releasing your striped bass.