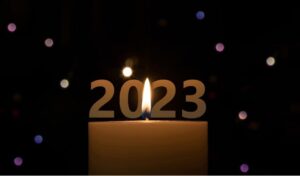 Most of us look at the dawning of a new year with a mixture of relief, hope and at least some cautious optimism. This is indeed true – maybe even EXTRA true – as we say good-bye to a year of more re-building and re-connecting (with families, work teams, communities) than many of us have ever before experienced, and hello to a brand-new year which will undoubtedly see its own share of ups, downs and totally unexpected occurrences.

It’s the perfect time to reflect on what this year may hold for each of us on a personal basis, and how 2023 is likely to affect us as worldwide and state citizens.

One of Nostradamus’ more sobering predictions for 2023 includes the devastating effect of global warming on life in our oceans, as referenced in this grim passage: “Like the sun, the head shall sear the shining sea: The Black Sea’s living fish shall all but boil.” Another prediction foretells some sort of “celestial fire on the royal (British) edifice,” which some followers believe to be an actual fire at Buckingham Palace, and other see as attacks on the legitimacy and reputation of the royal family. More predictions include 7 months of war, brought about by “great evil,” which may even lead to World War III. On a positive note…. Well, a booming economy, cloning and the widespread development of artificial organs are all supposedly just around the corner, in 2024!

Travel tech company Amadeus has come up with a range of predictions for the new year in the world of travel, hospitality and tourism.

According to the BBC, 2023 will be a remarkable year in several areas. Artificial Intelligence (AI) will impact industries like banking, technology, and data processing in the area of automation, meaning possible layoffs in those areas, but allowing companies to meet growth targets and stay on budget, too. Work-life balance and flexibility have grown in importance to employees during the pandemic; “AI” will also allow more employees to work remotely, and part time workers will fill in the gaps where there is a need. Automation performed by software robots on repetitive tasks will increase, including the growth of robotic personal assistants to help out with the most tedious of tasks.

Following the development of antibodies used during the pandemic, vaccines are being developed in the treatment of cystic fibrosis, tuberculosis, certain types of cancer, malaria, and other diseases. Advances in genetic engineering will result in therapies allowing a DNA strand to be altered, which opens up worlds of possibilities including in the fight against blood disorders such as sickle cell anemia. A drug called lecanemab, developed in late 2022 to slow down the devastating effects of Alzheimer’s, may start to be used by patients in early stages of the disease once it is approved by regulators… the first real treatment for Alzheimer’s. Finally, the European Space Agency, or ESA, will launch the Euclid telescope in 2023 to map out the universe, delving even deeper into space observation, and Japan’s Aerospace Exploration Agency will start planning for an exploration of the Milky Way.

What’s Going on in the Tarheel State

Back down to Earth, several interesting laws will go into effect in North Carolina over the next year, including one law – following a period in 2020 during which Governor Roy Cooper repeatedly and independently extended a pandemic-related state of emergency – that will require the governor to obtain formal support for extending a state of emergency past 30 and 60 days. Another new law drops the personal income tax rate from 4.99% to 4.75% in 2023 – a small change, but an improvement, nonetheless!

The southeast extension of the 540 Triangle Expressway – the “Raleigh Outer Loop” – will be completed in 2023 and will finally open to traffic in the spring of 2024. This $2.2bn, 70-mile roadway, designed to reduce congestion on I-440, I-40, NC 42, NC 55, and Ten Ten Road, will link together the towns of Apex, Cary, Clayton, Garner, Fuquay-Varina, Holly Springs, and Raleigh, completely encircling the city by the time it is complete.